Longsword VS Katana – Who Will Win?

The most popular, iconic, and recognizable weapons in history have always been the European longsword and the Japanese katana – both having great designs that have evolved and developed to efficiently face the numerous challenges that were present in the battlefield.

Each of the weapons have been improved and tested throughout time under the unforgivingly strenuous and devastating trials of war and battles, adapting to the circumstances to provide warriors with extremely durable, efficient, and powerful tools that were utilized on the battlefield.

The Katana and the Longsword

The idea of evaluating the katana vs longsword can be truly intriguing, yet attempting to do so can be quite interesting, as well as challenging; it is actually more complicated than simply throwing out the question, “The katana VS longsword, which one is better?”.

Both of the swords feature unique and interesting characteristics that categorize the blades as part of historical weapons, and some of these attributes include their specific weight, length, shape, as well as their blade geometry, point, edge, and hilt configuration. Additionally, when these weapons are wielded correctly, both swords possess a specific core of gravity as well as inherent balance.

The katana is known to be one of the traditionally made blades that were greatly utilized by the samurai warriors of the ancient and the feudal period of Japan The katana can be described by its distinctly unique appearance that features a single-edged and curved blade with either a squared or circular guard; additionally, it also features a long grip to accommodate both of the wielder’s hands. The katana has grown popular due to its cutting power and effectiveness, plus its single, wedge-like, and hardened edge has been claimed to exhibit excellent sharpness.

A longsword is a specific type of European weapon that is depicted by having a cruciform hilt and a double handed grip that measures around six to eleven inches; it also features a straight, double-edged blade that approximately measures around thirty-three to forty-three inches. 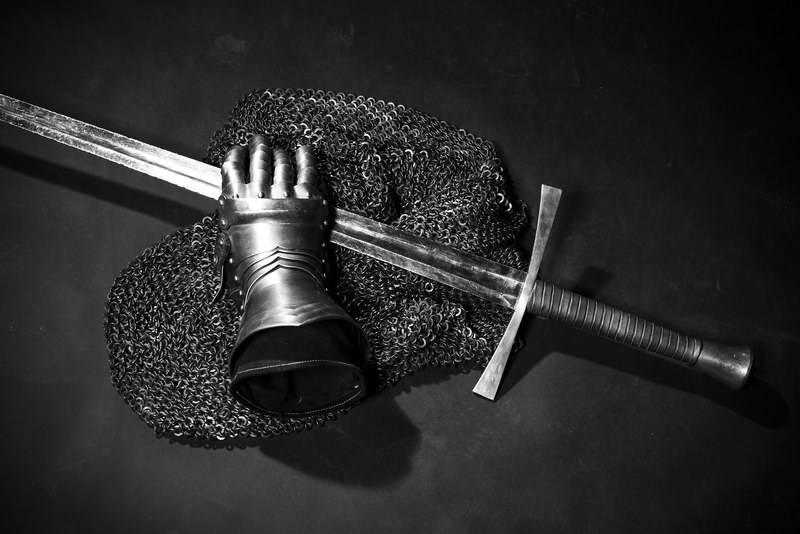 The design of the longsword, specifically its hilt arrangement and center of gravity, allows the wielder to take full advantage of the weapon’s blade, allowing them to stab or thrust further compared to when they utilize a short sword; additionally, having a blade with a narrower point allows the user to thrust faster with excellent penetration compared to wider blades that are developed specifically for cutting.

The longsword has been utilized since the ancient times where fencers during the mid-sixteenth century displayed that straight weapons were able to execute quicker thrusts in a more deceptive manner compared to semi-curved or curved blades.

When it comes to the katana vs longsword, both were considered as established thrust and cut weapons and are both efficient for slicing, slashing, as well as stabbing moves; also, these weapons make use of defensive and counter-striking displacements and each of the swords made use of a specific style of swordsmanship that was exhibited through proper control of timing and distance.

Since the relative weight of the katana and longsword were almost equal, the differences all go down to both swords’ geometry of how each of these can be utilized and moved: curved blades that are shorter can quickly slash a target whereas a longer, straighter, and narrow blade can instead, thrust faster. This only means that one specifically emphasized swift and quick slicing moves that are considered decisive single strikes, while the other emphasized quick, long-reaching stabs in combination attacks.

Moreover, there were also evidences that show both swords created in different versions that were specifically for armored battle, while other versions were intended for unarmored battle. Because of this, it only further complicates all efforts to ascertain the design’s sturdiness and durability.

Swordscholar
Previous articleWhat is Kendo?
Next articleTypes of Swords

Longsword VS Katana - Who Will Win? The most popular, iconic, and recognizable weapons in history have always been the European longsword and the Japanese...
0
Read more
Japanese Swords

Who Was The Invisible Warrior Known As Ninja? Majority of the boys would most likely know the term...
0
Read more
Hema

Warfare was vital in ancient India, especially for the Maharajahs, emperors, and kings. This was due to their aim of attaining dominance...
0
Read more
History and Culture

The Samurai is the most powerful military caste who is famous to wield a sword. Their dedication and skill in using a...
0
Read more

0
Katana VS Rapier - Who Will Win? There are numerous claims and beliefs that the rapier vs katana represent the most ideal cutting and thrusting...
Read more

Miyamoto Musashi or also known as Miyamoto Masana, with the Buddhist name of Niten was the most famous and considered to...
0
Read more
History and Culture

They nourish the Samurai lifestyle with fresh harvests and well-balanced meals. Because they believed it provides them with the right energy and...
0
Read more
Medieval Swords

There can be a variety of swords with different pasts. Each sword is unique and some stories are simply quite unexplainable. If...
0
Read more