The quick and highly notable development, as well as the improvement of science and art best defines the Renaissance era. War and weapons continued to complete the scenery of a still and warlike period that even the most skilled artists were required to utilize their full creativity to exhibit war-related purposes. During the Renaissance period, there was an abundance of weapons; and although armor and arms were mostly associated with warfare, these were both utilized in different frameworks such as hunting, parade costumes, and even tournaments.

The symbolic value of armor and arms was exhibited in these being display items in parades, triumphal entries, tournaments, and funerary achievements – specifically an arrangement of armor and weapons hung on a knight’s tomb. Also during the Renaissance era, a number of some of the most lavish maces, swords, armor, shields, and even firearms were crafted specifically for ceremonial purposes. Here is a list of the different types of Renaissance weapons that everyone continues to admire and be fond of.

Swords are probably the most common weapons in history and that also goes for the Renaissance warfare. A sword is generally made up of a hilt and blade and it usually has a single or double edge for cutting and striking; additionally, the sword also features a point for thrusting. The fundamental intent and physics of swordsmanship remained constant throughout the centuries, yet the actual methods differ among cultures and periods due to the variations in blade design, as well as purpose. Compared to the spear or bow, the sword is entirely a military weapon which gives it the symbol of warfare or naked state power in a lot of different cultures. 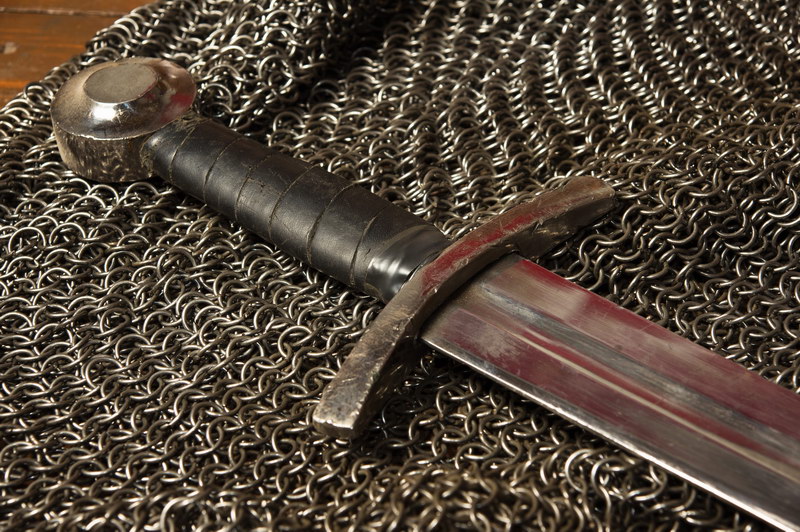 The arming swords or knight’s / knightly sword is known as a single-handed cruciform weapon from the High Middle Ages.

The longsword is a kind of European weapon utilized during the late Medieval era which was around 1350 to 1150. Longswords feature long, cruciform hilts with grips that measure around ten to fifteen inches in length to provide enough room for two hands.

The term broadsword describes a sword with substantial, straight, double-edged blades, and these could feature blades with the form of a broadsword or backsword – a piece with one cutting edge. These swords were mostly favored during the Elizabethan era of England and in modern times, the term can be utilized to describe arming, one-handed cruciform swords from the High Middle Ages.

A falchion is a single-edged and single-handed sword of European origin with designs that are similar to the Persian scimitar. What’s great about the falchion is that it combines the power and weight of an axe plus the versatility of the sword.

Daggers are double-edged blades utilized for thrusting or stabbing. The dagger’s role is usually a secondary defense weapon for close-range combat, and in most cases, its tang reaches throughout the handle along the blade’s centerline. One can differentiate a dagger from a knife since daggers are primarily for stabbing while knives are single-edged weapons made mostly for slicing / cutting. The left-handed dagger was of continental origin thus, gaining quite the popularity in England during the sixteenth century. In a duel, the weapon is held in the wielder’s left hand to defend against blows; long rapiers were held in the wielder’s right hand.

Polearms or the pole weapon is known as a close-range combat weapon wherein its main force is focused at the end of its long shaft which is commonly made of wood. The purpose of utilizing these weapons is to increase angular momentum or extend the user’s reach, improving the striking power when the polearm is swung. The idea of linking a weapon to a long shaft is actually an old one and the first spears date all the way back to the Stone Age. Staff weapons from the Renaissance or Medieval period were all lumped together under the category of staves.

Massed individuals wielding weapons with pointed tips were highly recognized in history as part of organized warfare, considering them as efficient military units. When it comes to defense, the warriors wielding the polearms were definitely challenging to reach and for attacks, these were devastating to every unit unable to escape its reach. During the advent of armored warriors, especially cavalry, the pole weapons were usually combined with the spear point for thrusting with a hammerhead or axe for deadly swinging strikes which could readily break through armor.

The francisca is known as a throwing axe that has been utilized as a weapon by the Franks in the Early Middle Ages. These were considered as the national Frankish weapon during the time of the Merovingians from around 500 – 750 AD; it is also known to have been utilized during Charlemagne’s reign in 768 to 814. Although these were identified with the Franks, the weapon was also utilized by other Germanic people such as the Anglo-Saxons. The Francisca is described by its uniquely shaped arched head that widens towards its cutting edge; it terminates at an extended point along the lower and upper corners. The top portion of the head is usually convex or S-shaped with its lower part arching inward to form an elbow with a shortened wood shaft. 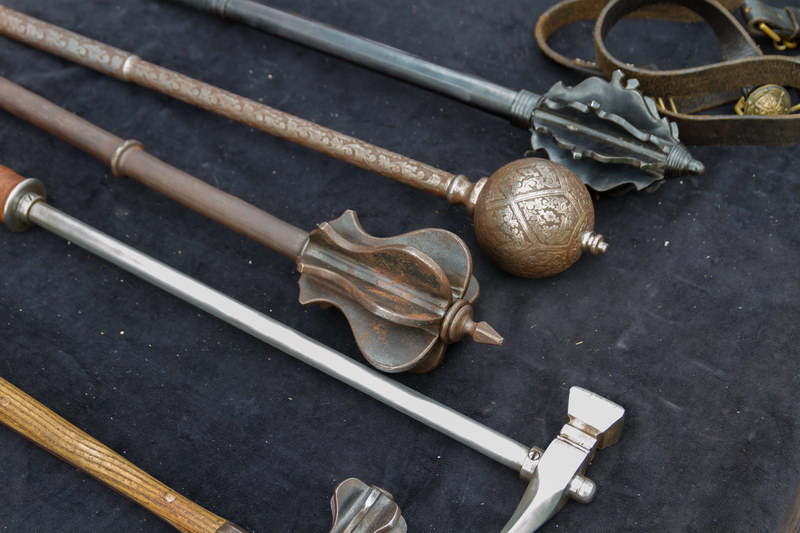 The mace is a weapon that utilizes a heavy head fixed at the end of a handle; this is to deliver powerful and deadly blows to an opponent. Maces are developments of clubs but it differs from a hammer in a sense that its head is symmetric, allowing blows to be delivered equally and effectively with any side. A mace is made up of a heavy and strong wooden or metal reinforced shaft with the head of bronze, stone, copper, iron, or steel.

Its head is commonly around the same or slightly thicker compared to the shaft’s diameter and can be shaped with knobs or flanges that allow for greater armor penetration. The length of these maces varies considerably: for the foot soldiers, their maces were usually short at just two to three feet while the maces of cavalrymen had a better design and were much longer for blows from horseback; for the double-handed maces, these can even be larger and deadlier. These weapons are rarely used in this day and age especially for combat, but universities, government bodies, as well as other institutions utilize ceremonial maces to symbolize authority; these are also used in processions, rituals, and other purposes.

A bow is a weapon that releases arrows that are powered by its elasticity; longbows are types of bows that are tall and almost equal the height of the individual using it. Flatbows can be just as powerful as the longbows, though the only difference is in the cross-section, where the flatbow features limbs that are rectangular in shape. During the Middle Ages, the English and the Welsh were popular for their extremely powerful English longbows which were utilized effectively during the civil war period; these were also used against the French during the Hundred Years’ War. 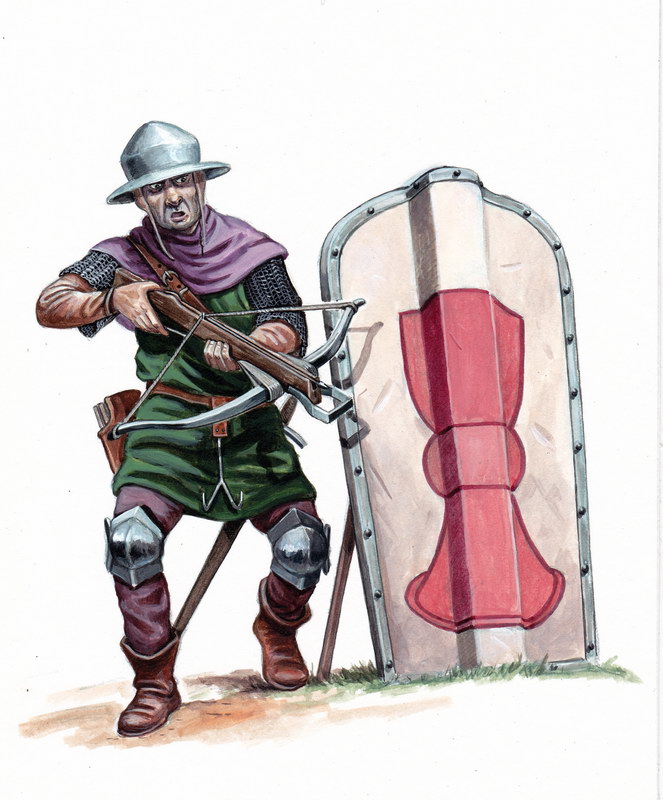 The Medieval crossbow was also referred to as the Balista or Arbalest in Medieval times. This was the very first type of medieval bow that featured a mechanized loading system, and it was fashioned in a cross-shape, hence, the name crossbow. The medieval military men who were foot soldiers utilized the medieval crossbow to full effect; it was easier to load compared to regular bows which required to be manually drawn back and required less training. Medieval crossbows were also utilized by the foot soldiers since these were great weapons against the medieval pike men and knights who could be easily picked off at a certain distance.

The science of artillery, as well as handguns, featured considerable progress during the Renaissance period. Weapons such as the caliver and arquebus replaced the bows due to the accuracy, efficiency, penetrating power, plus the rate of fire. Though these were highly favored, the change didn’t come easily and through the sixteenth century, there was some struggle between the bullet and the arrow. Supporters of the first weapons had a clearer advantage on ingenuity and eloquence; yet on the battlefield, the shot gave a steady advance while the bow – the weapon that somehow decided the victories from the very beginning of the world – was simply driven from the battlefield.

Although technology was still considered fresh and early firearms, as well as similar weapons, were still said to be inaccurate and quite challenging to reload, these pieces were still highly effective elements on the battlefield which led to the victory of soldiers. They were also able to engage enemies from a certain distance and could also penetrate armor with ease; and as for the early shotguns or blunderbusses, these could readily stop any fully armored soldier with just a single shot.

Who Was The Invisible Warrior Known As Ninja? Majority of the boys would most likely know the term...
0
Read more
Japanese Swords

The Japanese culture is rich in arts and feudal wars. Just like the Medieval times, the Samurai with their Japanese swords and...
0
Read more
Martial Arts

Samurai warriors ruled during feudal Japan. Their main weapon is the Katana. This gave way to weapon-based martial arts. One of them...
0
Read more