A battle axe is an axe that is primarily fashioned for combat. Battle axes were specific versions of utility axes and a lot of these were suited for single-handed use; other battle axes were fairly larger and were used with two hands.

Features of the Battle Axe

The medieval battle axes were weapons made by skilled blacksmiths and these were designed specifically for warfare. The axes measured around thirty centimeters or more and weighed over three kilograms; cleaving weapons were much longer than 1.5m and would be categorized as polearms instead. These battle axes were usually made of steel, iron, and at times, bronze, while the handles were often made of wood.

Brief History of the Battle Axe

Together with the spear and club, the axe is considered as mankind’s oldest and most traditional close-range weapons for battle. The very first axes that were utilized as weapons were mostly used as tools since these were close at hand.

Though as time passed, the focus changed to developing and improving specific axes for battles, and the ordinary pieces were still utilized as weapons until recent times. Axes that were produced intentionally as weapons for combat were called the battle axe; these pieces were made as far back as the Bronze and Stone Age.

Axes that were made to be thrown as projectiles were called the throwing axes; these were pieces that featured short handles. These types of weapons were utilized by the Teutonic tribes in the Great Migration era in the years 400 to 500 AD. The Franks also used these weapons and theirs were thick with extremely sharp axe heads; short handles were also usual for the Frankish throwing axes and could be launched at a distance towards the enemy.

Excavations in numerous central European graves (from 500 to 750 AD) featured a uniquely special axe that was called the Francisca. It was initially utilized by the Franks and it featured quite a unique shape which was specifically designed to be an efficient weapon for throwing.

When thrown with great accuracy, the weapon could rotate numerous times in the air before it hits its target. The Francisca was mostly used as a hand weapon during close-range combat since it was necessary to keep a firm grip on weapons at all times.

Battle Axes in the Viking Age

In Scandinavia, these weapons became extremely popular especially in 800 to 1100 AD during the Viking Age; it became the weapon of choice among warriors who battled in history. During this era, the Nordic smiths came up with axes that featured thinner blades and longer handles, making the axes’ heads lighter for use during battle. This specific type of axe was common in the year 1066 during the Battle of Hastings. 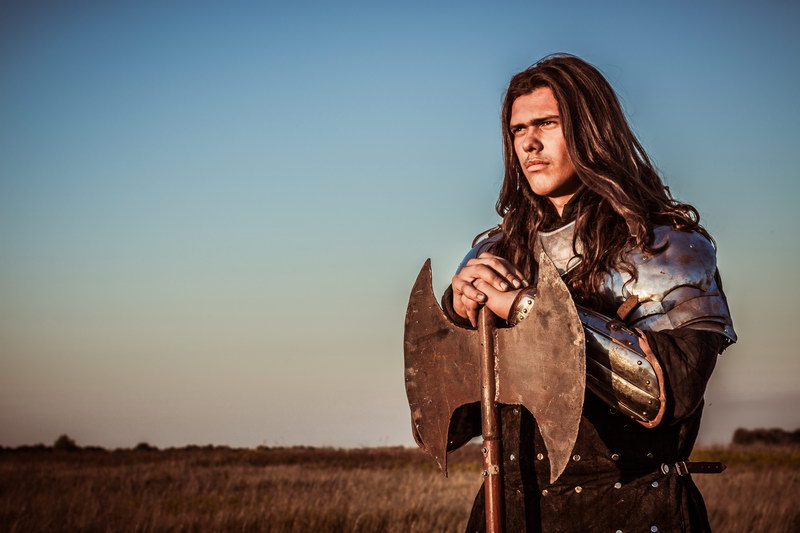 The Middle Ages and the Renaissance Period

During the Renaissance and Middle Ages, numerous armies from Europe usually carried two different kinds of battle axes: one was a small one with a short handle while the other was a fairly larger one with a much longer handle.

Knights usually fought on foot when wielding these battle axes and during the fifteenth century, the German and French knights particularly used special battle axes that had more weight and shorter handles. The edges were also blunt enough to crush the enemy’s armor with ease.

In Central Europe, the throwing axes were made entirely of iron and were utilized in the late Middle Ages. The handles usually measured around 25 to 30 centimeters in length and these ended in a point; the butts also featured sharpened spikes and the axes also featured sixteen-centimeter long cutting edges. An example is the bearded axe which usually appears with an elongated edge and a saber-like arch called the beard. Axes with beards usually came in numerous varieties with one or more hooks or points.

These were sometimes referred to as the half-moon though other names included the bardiche and halberd. These types of axes were common in Central and Western Europe during the fourteenth century before they were widely utilized in Eastern Europe and Sweden.

In Europe, these weapons eventually dropped in popularity when swords were created; however, the axes still remained an easily accessible and cheap weapon for regular individuals such as peasants during times of unrest and self-defense against bandits.

Saigo Takamori, A Japanese Samurai was born in Kajiya-chō, Kagoshima in 1828. He is famous for taking a significant and final stand...
0
Read more
Medieval Swords

Ancient Egypt, along with the Khopesh, has been vital in shaping modern civilization. For a long time, Egypt has set a place...
0
Read more
Sword VS Sword

Longsword VS Katana - Who Will Win? The most popular, iconic, and recognizable weapons in history have always been the European longsword and the Japanese...
0
Read more
Martial Arts

They nourish the Samurai lifestyle with fresh harvests and well-balanced meals. Because they believed it provides them with the right energy and...
0
Read more

Sieges are a part of war and are usually unavoidable. Throughout the history of warfare, it has been shown that sieges are...
0
Read more
Asian Swords

The Swords of Southeast Asia

Protection, peace, war, prestige, death, and beauty - all these can relate to the swords of Southeast Asia. In...
0
Read more
History and Culture

We all have heard of tales and legends where the hero of our story had to fight their own family. And...
0
Read more