Glory and honor in battle is truly an important aspect for the Viking warrior since he also needed to follow his king or lord to the battlefield, on expeditions or raids. During battles, Vikings used to fight on foot while wearing chain mail armor and helmets; plus, they also carried spears, axes, swords, wooden shields, and they were also highly skilled with bows and arrows.

The weapons of these Vikings were usually crafted with iron, as well as fashioned with encrusted or inlaid copper or silver. Generally, the sword was considered as a warrior’s most prized possession and a fancily decorated one displayed the owner’s wealth. When it comes to the most common weapon of the Vikings, long-handled axes made from wood were highly favored. If a Viking warrior died, their weapons were usually buried with them.

Below are the various types of Viking weapons that the warriors utilized for battles in the past.

The spear was considered as one of the most common weapons with an iron blade fixed on a wooden shaft. This piece was commonly utilized for both throwing and thrusting, plus its blades usually varied in shape: from long spikes to broad leaf-shaped blades.  Specialized designs for the spears featured light and narrow spearheads which were specifically made for throwing; the much heavier and broader ones were made for stabbing. Skilled Viking spearmen were known to be able to fling two spears at the same time using both hands; it was also said that they could catch spears in flight and easily hurl these back with deadly accuracy.

Two distinct types of knives were utilized by the Vikings and the most common piece was called the knifr – a plain single-edged knife that had a normal construction. The knifrs could also be found in a lot of graves since this weapon was allowed for everyone, even for slaves. When it came to the smaller knives, these served as daily utility tools whereas the longer types were meant specifically for combat, hunting, or both. Knives for weapons usually featured ornamental inlays right on the blades and its construction was quite similar to the classic Scandinavian knives. The tang usually went through a somewhat cylindrical handle with a straight blade and sweeping edge that moved upward towards the tip, meeting the back portion of the blade’s point.

Another weapon that the Vikings utilized was the seax but the type that was mostly associated with them was the broken-back style. This was slightly heavier compared to the regular knife and could also work as a type of falchion or machete-like arm. Wealthier Vikings could possibly own a bigger seax which could sometimes function just like swords; and with its heavy blade and single edge, the weapon was somehow crude and relatively easy to use and produce. A lot of samples featured long tangs which indicated that these may have had a lengthier handle for double-handed use. The use of the seax was widespread among the Germanic tribes and appeared in Scandinavia in the fourth century; it even exhibited a distribution pattern from the lower Elbe to the Anglo-Saxons. At the end of the Migration period, the popularity of the seax on the continent slowly declined but was still taken by the Vikings on the British Isles.

Almost all Vikings carried weapons at all times and typically, these were the axes that they secured on their belts. The axes featured long handles to provide the Vikings with advantage for longer reach during battles; and depending on the wealth and usage of the axe wielder, its cutting-edge ranged from three to eighteen inches in total.  The predominance of these axes in archaeological sites can be associated with its role as a weapon and a common tool; this finding is supported by the numerous burial sites of female Scandinavians that include axes. A couple of large axes were specialized for battles and these eventually evolved with much longer shafts and bigger heads. The larger types were as tall as men and were made to be carried with both hands; these were called the Dane axe. 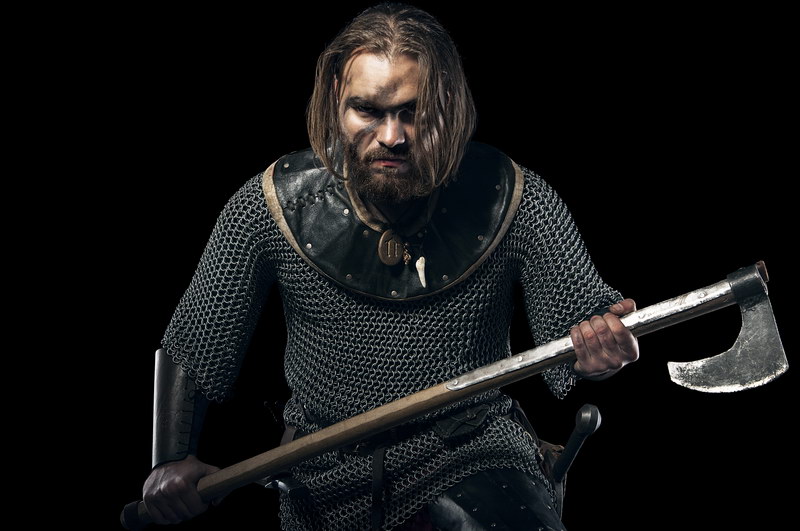 In the later Viking period, the broad axe appeared and these featured axe heads that sported crescent-shaped edges that measured around 18 inches in total. The double-bitted axes exhibited in contemporary Viking art were extremely rare pieces which utilized more materials when crafted. Most of the axes that the Vikings carried were sturdy and durable enough to be swung or thrown with deadly force. A famous battle axe of the Vikings was the Mammen which was suited for melee combat and tossing. The axe head was commonly made of wrought iron that featured a cutting-edge made of steel; this made the axe cheaper compared to a sword. And also, just like all the other Scandinavian weapons, the axes were usually given names by their wielders.

The Bow and Arrow

The bow and arrow was initially utilized for hunting but at some point, the Viking warriors learned about the efficiency and accuracy of the bow and arrows during raids. Archers were able to release deadly arrows that could kill a large number of enemy troops compared to close-combat fighting. As for the skilled archers, they could shoot an average of 12 arrows per minute. These arrows were so strong that it could easily penetrate the enemy shields. 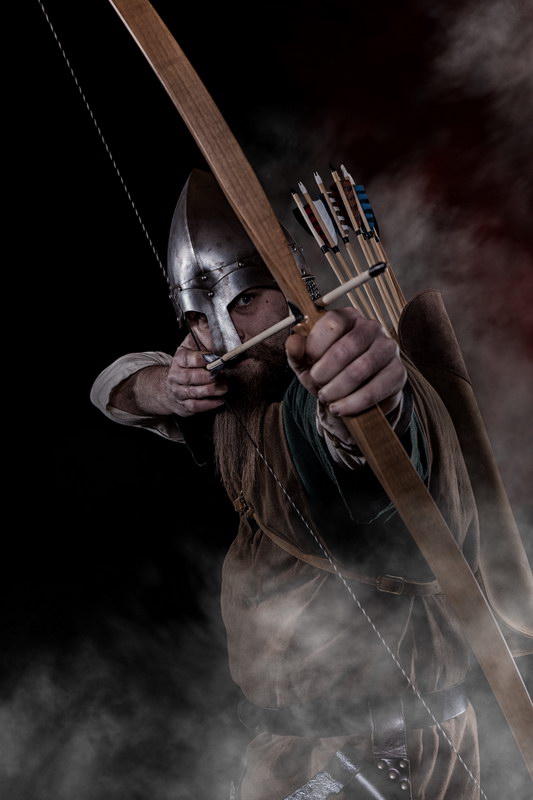 Just like all other warriors, the Vikings too wielded swords for battle. The Viking Age sword was utilized for single-handed battles and was often carried together with a shield; these were commonly double-edged blades with a length that reached ninety centimeters. The shape of these swords was still based on the appearance of the Spatha of the Romans that featured a deep and long fuller, tight grip, as well as a pronounced cross-guard. The sword wasn’t exclusive to the Vikings; instead, these were utilized for throughout Europe.

Swords became a sign of high status since these were very costly to create; these were also rarely used and the swords found in graves were assumed to be less sturdy for battle or raids. Earlier blades were usually pattern-welded and featured a hardened edge. The local craftsmen commonly included their own hilts that were elaborately decorated, and just like the other swords during the period, these were often given names such as Gold-hilt or Leg-biter. As for the sword’s grip, these were usually made from organic materials like antler, wood, or horn and were usually wound with textile for easier gripping.

During this period, a unique class of single-edged swords was known from Eastern Norway. These weapons featured the same grip as double-edged swords and blades with proportionate length. The blades of these swords usually varied from slim and long to something heavier, giving it a cleaver-like equilibrium.

The most common form of defense were the shields and it was commonly mentioned that linden wood was utilized to construct these shields; however, numerous finds from graves were shields that were usually made from timber such as alder, fir, and poplar. These types of timber were not really dense and were light in one’s hand; these were also not apt for splitting like oak. Additionally, the timber’s fiber usually binds the blades which prevented it from slicing deeper unless additional pressure was applied to achieve this. Combined with stronger wood, the Viking warriors occasionally supported their shields with iron but it was usually leather around the rim. 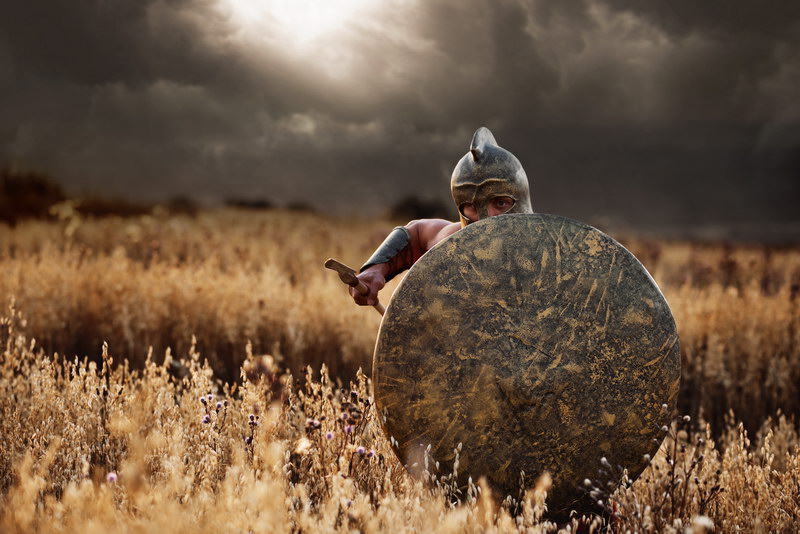 Shields that featured smaller sizes came from the Pagan era for the Saxons while the larger ones came from the tenth and eleventh centuries. Most of the shields that were exhibited in illuminations were painted with just one color although some shields were featured with different designs painted on them. Some of the round shields that survived history featured more complicated designs that were commonly painted on them; at times, ornate gold and silver work was applied around the strap anchors. Round-shaped shields seem to feature various sizes from about 18 to 47 inches in diameter but the most common size is around 30 to 35 inches. There also was a kite shield and this was mostly favored by the Normans; it was also introduced to the Europeans by the Vikings.

A polearm called the atgeir is mentioned in numerous sagas from Iceland as well as in other literature; this polearm is also translated as the halberd which is akin to the glaive. Gunnar Hamundarson, a 10th century chieftain from Iceland, is described in the saga Njals as impaling and cutting his foes with the atgier. Weapons that usually appear in sagas include the Viking halberds and these weapons have not really been found in graves. The Viking halberds may have been rare pieces or these may not have been included in the funerary customs of these people.

The Historical European Martial Arts or HEMA means European martial arts. These are practices originating from Europe that were once taught and...
0
Read more
Medieval Swords

Popular Types of Swords Throughout History Throughout history, different types of swords have been utilized by warriors who charged and fought on the battlefield. Generally...
0
Read more
History and Culture

The Samurai is the most powerful military caste who is famous to wield a sword. Their dedication and skill in using a...
0
Read more